Robot Shuttles are not Robotaxis 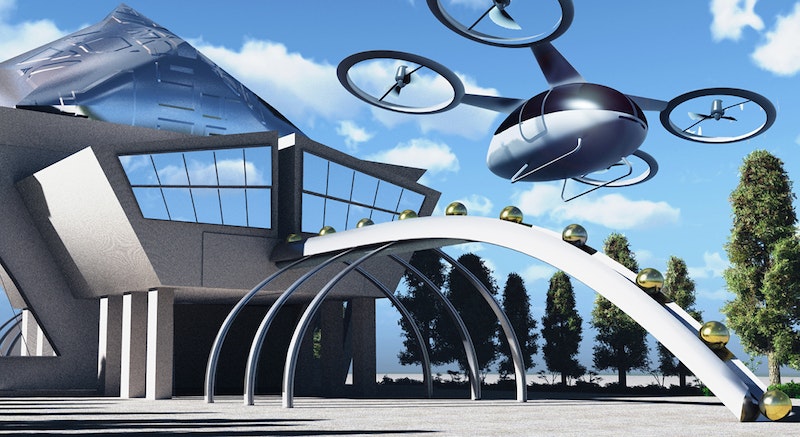 Robotaxis are nothing more than repurposed autonomous cars used for ride-hailing. Some may be bought by ride-hailing companies and Tesla sees you being able to afford a much fancier car if you hire it out for part of the day.
e.Robot shuttles are the opposite - a totally new form of transport. Not sold to private people, they are custom-designed for cities having an exceptionally small footprint per person. They have large sliding doors for wheelchair accessibility and are boxy and symmetrical so no U-turns are needed. That means they will be allowed down walkways since they are gated to only go at modest speeds. Silent, clean, safe, and unobtrusive, they are probably going to be able to go into shopping malls, and sometimes they will be carrying passengers free of charge. Costs can be covered by advertising, doubling as parcel delivery and other options. Smart cities thus empower the poor and disabled - their avowed intent. Intensively used and rarely empty because they are multipurpose, smart shuttles eliminate traffic congestion as space-wasting, under-utilized conventional vehicles are restricted or banned. Eat your heart out Robotaxis.
On cue, analyst firm IDTechEx has launched a new report, "Robot Shuttles for Smart Cities 2021-2041" to explain the new realities and to present technology roadmaps and forecasts for 20 years ahead. The first large orders have been placed. More of the world's giant companies have entered the fray, some even likely to be both customers and manufacturers. However, with several committing billion-dollar levels of investment, IDTechEx cautions about some predictions of "selling hundreds of thousands a year" soon. IDTechEx forecasts are more sober but large on a twenty-year view.
Robot shuttles are a genuinely new form of transport being created from the ground up by about 40 organizations. Most have standing room and all-around large windows will prevent claustrophobia. Great for tourists.
The technology roadmap in the report is fabulous. One manufacturer is introducing solar bodywork to make some of the power. Some will fit the new micro-LED windows selling advertising. Some will dock sideways, others repurpose with modular body-swapping to become mobile fast food, utility vehicles, outdoor event ticketing, and more. Toyota is even building its own smart city around such vehicles and it may even eliminate sidewalks.
See new infograms, tables, and graphs comparing all options and new technology commitments from 2021. Absorb other ideas and benchmarking from multi-lingual PhD level IDTechEx analysts across the world.
The latest news is that the projects are splitting into small and large sizes. There are painfully small 4-6 seaters that are intended to compete with robotaxis but they cannot get people with monster luggage to the airport at speed. IDTechEx finds that the big potential is the larger ones typically 10-25 passengers including standing and not intended to leave the city. These can replace private city cars, school, micro and midibuses, even last-mile package delivery. The report, therefore, covers all this new progress and these platforms. 360-degree wheels, new motors and batteries, autonomy technology detail, issues and economics, structural and transparent electronics, solar, smart windows. Who? When? Why?
The 500+-page report "Robot Shuttles for Smart Cities 2021-2041" is unique in being so thorough and up-to-date and being written by globally acknowledged experts. It seeks to give an easily-absorbed commercial look at the technology, applications, and business opportunities worldwide. That involves over 100 new infograms, graphs, comparison tables, photographs, and diagrams. The report even looks deeply into the autonomy options vital to success. There is much news from 2021 assessed here and the report is regularly updated so you get the latest.
The Executive Summary and Conclusions explains the basics, gives over 20 key conclusions, detailed comparison tables of projects, and all those forecasts, surfacing how they are evolving into key technology and applicational families now. It is sufficient in itself for those with limited time. The Introduction then compares bus and robot shuttle types with detailed tables and images. See relative efficiencies, the scope for vehicles that go where others are banned, vehicle populations worldwide, date, and impact of peak car with reasons. Here are visions for robot shuttles and lessons from trials of very different business cases.
Chapter 4 is a long one because it covers 39 projects in 20 countries with trials, customers, technologies, uniques, shortcomings, dreams, and the IDTechEx SWOT report in each case. Chapter 5 then concerns the next technology other than autonomy for it is this that can sell more product by making shuttles more useful, lower cost, longer range. Indeed, vehicle-to-grid and window advertising with light-emitting video are among the ways of earning extra income streams that are described here. This is such a fertile area that many robot shuttle services such as school runs will be offered free of charge.
The following chapters are a very detailed look at autonomy technology revealing cost and performance issues and best routes to safe, affordable, acceptable, insurable autonomous robot shuttles everywhere. The report then ends with detail on those new bright transparent micro-LED displays that can make the many windows readable in the dark from inside and outside to loudly proclaim repurposing (UPS, School Bus, etc.) and sell that advertising. Indeed, with so many earning streams from vehicle-to-grid and repurposing, they may be able to do the school runs at no cost. On the other hand, some will be fully utilized for ride-hailing but those proponents starting to call such vehicles robotaxis miss the bigger opportunity.
For more information on this report, please visit www.IDTechEx.com/shuttles, or for the full portfolio of research available from IDTechEx please visit www.IDTechEx.com/Research.
IDTechEx guides your strategic business decisions through its Research, Subscription and Consultancy products, helping you profit from emerging technologies. For more information, contact research@IDTechEx.com or visit www.IDTechEx.com.